Building upon its first fifty years of success, SEYI is transforming to a truly global company, achieving its vision of R&D in Taiwan, production in Taiwan and Mainland China and sales to the global market.

SEYI (SHIEH YIH MACHINERY) (4533 TT), one of the world’s leading producers of mechanical presses, celebrated its 50th anniversary at its global headquarters in Taoyuan, Taiwan on Friday, November 2. The historic event was witnessed and attended by Taoyuan County Magistrate Mr. Chih-Yang Wu, representatives of the Industrial Development Bureau, and over 500 representatives from SEYI’s international and domestic clients and partners.

Speaking at the event, Ms. Claire Kuo, Chairman and Chief Executive Officer said, “Established 50 years ago by the Company’s founder, Mr. Shen-Hsiung Kuo, SEYI is transforming into a global company that has already won a place in the world’s press machine industry through its commitment to technological development and customer service. Since 2009, SEYI has been investing three percent of its annual revenue each year into research and development, and has internally developed critical components such as server motors and control systems. As a result, SEYI no longer needs to rely on third-parties for the supply of high quality, critical components. In 2011, SEYI launched a series of low power consumption and low noise press machines that have received awards for excellence from Taiwan’s metal forming industry. SEYI’s success proves that Taiwan is not only a place for manufacturing, but also a source of new product development, and that the company’s press machine technology has reached international standards.”

Ms. Kuo added, “Despite the uncertainties in the global economy, SEYI is confident that it will become the fifth largest company in the world’s metal forming machine tool industry within five years. Our core advantages are a well-integrated supply chain, the capability to design and manufacture critical components, a very favorable cost/performance ratio, and short delivery times. SEYI will continue to invest in the Taiwan market, inspired by its spirit of ‘Pressing Ahead’ and transforming over the next fifty years to achieve its vision of ‘R&D in Taiwan, production in Taiwan and Mainland China, and sales to the global market.’”

In the celebration event, MS. Kuo unveiled SEYI’s roadmap for development. Through a continued emphasis on “technological development” and a proactive “brand marketing” strategy, SEYI aims to become the best – not the biggest – company in the world’s press machine industry. Globally, SEYI has already established a subsidiary in Frankfurt, Germany, underscoring the importance of the European market, and continues to pay increasing attention to the South-East Asian countries and newly-emerging nations, including Mainland China.

In order to meet the future demands of China’s passenger car industry, SEYI has invested RMB100 million ($16.0 million) on the second-phase expansion of its plant in Kunshan, Jiangsu Province. In the future, SEYI will invest more capital and resources to develop its technology and extend its business to rapidly growing car markets such as those in Vietnam, Thailand, Indonesia, India, Turkey, Mexico and Brazil.

To develop its brand, SEYI has established a two-phase strategy. In its first phase, SEYI has been promoting its brand within the industry and, over the past several years, has been a sponsor of annual conferences held by the Precision Metalforming Association in the United States and the Confederation of Chinese Metalforming Industry. These activities and sponsorships have enhanced SEYI’s visibility and brand awareness in the world’s machinery industry. In its second phase, SEYI will promote its brand awareness among the general public and the global marketplace. 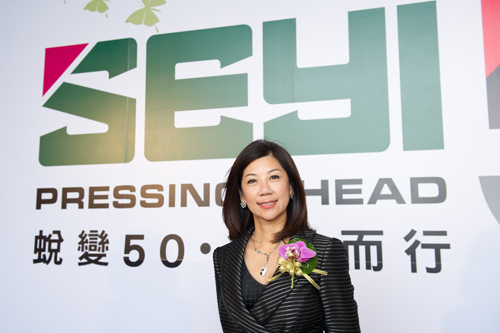 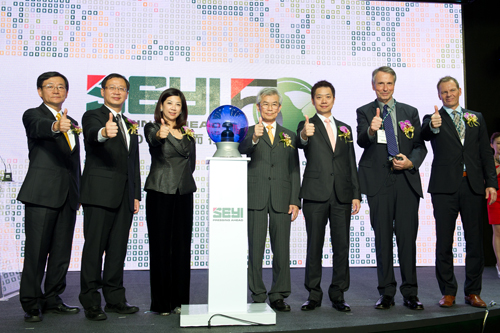 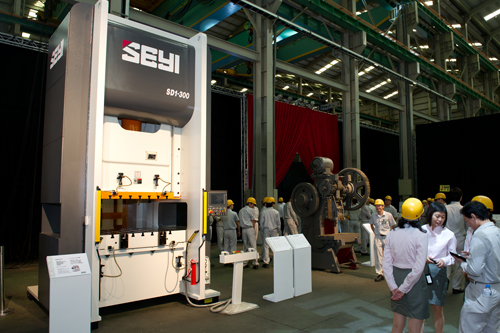 Under the "Three Industries, Four Reformations" industrial policy recently espoused by the Executive Yuan of Taiwan, the country’s machine tool industry has been designated as one of five strategic "spotlight" industries. Over the next 50 years, SEYI will continue to adjust its management strategy and strategic direction to meet the challenges of global competition. The company will expand its business scope by meeting market demands, improving its marketing, and integrating industry resources. SEYI’s goal is to be the link between the global Metal Forming Machine Tool industry and Taiwan’s manufacturing sector, presenting Taiwan’s successful experience to the world, with SEYI’s brand being a beacon to all.
2012-11-06
Back
This site uses cookies to collect the necessary user browsing behavior so that we can provide you with a better browsing experience. Browse this site, which means you agree with "online privacy declaration."
× Close